I was a very fortunate child, growing up on a farm in the Willamette Valley; my Dad got his first shorthair in 1952, a year before I was born. She was my best friend, as were the two that followed her! These dogs were hunters, babysitters and kept an eye on the farm.

Becki and I got our first shorthair in 1975 (Henri), this was her first shorthair, it took about 10 seconds and she was as hooked as I had always been. Henri was 18 months old, an absolute clown but terrified of anything that went pop, with a lot of love and care, I was able to hunt over her and she was awesome! Sadly, we lost her about 2 months before we made our big move from Oregon to California.

After we had been here for a couple of years we decided it was past time to get another dog, this was Becki's first shorthair puppy, what an education! Beamer was a 4 legged wrecking crew, Becki now believes in crating puppies when they are left unattended, but Beamer quickly grew out of that stage and was one of the best dogs we have ever had. Beamer was a true companion, excellent hunter and all around great shorthair!

Three years after we lost Beamer, who lived to be 14 1/2 years old, we said enough, we need dogs, our life has not been the same since, but it sure has been a lot of fun! We decided to get 2 girls, a shorthair and a wirehair; but, we ended up with our first 2 males, Bogie (a GWP) and Cooper (a GSP). With them we entered into the world of dog shows, hunt tests, training, field trials and a couple years later we had 2 Show Champions and Junior Hunters, we are very proud to say that we also now have our first Master Hunter (Owner/handled and trained), with a couple of Field Trial placements and they are great hunting dogs!

Since all of that wasn't enough, we brought home our girls; Breezy (a GSP) and Haiku (a GWP) and started the process all over again, both are Show and field titled and all four live in our house, are wonderful companions and live to hunt. Our dogs have literally gone from competing in the show ring to competing in field events on the same day; this is the versatile dog we love!
I am especially proud of the fact that with guidance from our friends and mentors, all of their titles are owner-trained and handled!! Chuck Ramage 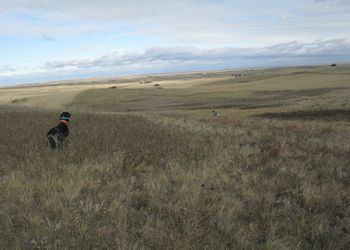 When I brought these two boys home, this was the image I had in my mind, I feel very fortunate to have captured this shot, Cooper is on point, Bogie is honoring, it just does not get any better! 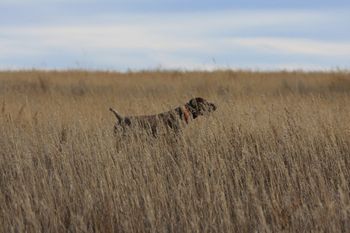 Breezy on a pair of Sharptails 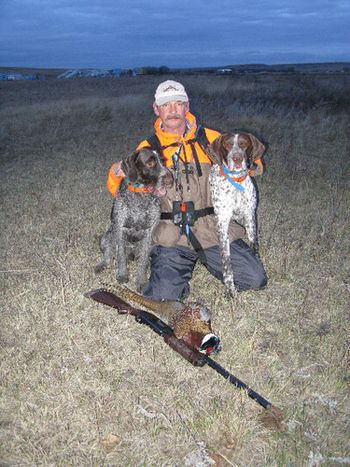 My boys at the end of a great day of hunting! Photo by John Nunes 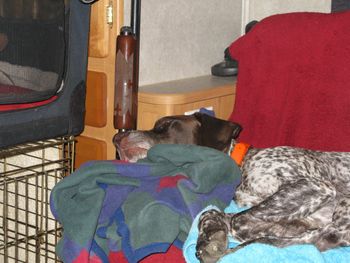 This is one tired but happy boy!

Bogie and his assistant Haiku, life is good! Photo by John Nunes